Welcome to the home of the legendary British made Oliver Tiger family of model Aero Engines.

A heritage that goes right back to the 1940’s when father and son team of John A Oliver and John S Oliver first became interested in the then popular sport of tethered car racing with their first successful engine the “Battleaxe”.

The firm’s early beginnings were in Nottingham near the Brough Superior motorcycle factory and then later in Ferndown in Dorset where they continued right up to the 1980’s.

In the early 1950’s they began making engines for model aircraft, and it was then that what was to become the legendary Oliver Tiger Mk3 was born. The 1958 team race world championship was won with a Mk3.

The reputation both in terms and performance of these engines continued to grow and at one stage there was a one year waiting list for engines.

J S Oliver’s retirement in the 1980’s left quite a void and of course in the control line world, the legend of the brand reached almost mythical proportions and many replicas were made by various companies.

In 2008 I was works engineer in a precision engineering company called Clint Hill Engineering in Hinckley, Leicestershire. My friend, boss and fellow aeromodelling nut was Tom Ridley. Tom had mentioned several times to me that he always wanted to make an engine especially as the only way that modellers could get hold of an Oliver Engine was to buy a Chinese replica. As it turned out Tom acquired the rights to the Original Oliver name along with all of the original tooling and the blessing and knowledge of John Oliver himself. And so came the rebirth of J Oliver Engines.  I was responsible for creating all of the CAD drawings and converting production onto our CNC Sliding Head lathes and machining centres. When we made our first engine (a Mk3 of course) I accompanied Tom to Ferndown to present it to JSO for inspection. JSO’s actual words were, “well done, it’s very convincing!”

So we continued with production and introduced all variants of the Oliver breed and even developed a new engine with JSO consulting called the JO19.

Sadly all production stopped with Tom’s untimely death in 2016. I always remained friends and stayed in touch with Tom’s wife Julia. It was always her wish to try to keep the brand not only alive, but in the same passionate way as that of the Olivers and later Tom Ridley who were all remarkable engineers.

This iconic all British brand is now back in business with all of the original Oliver tooling and the original knowledge passed down from JSO and later Tom Ridley. As always the engines will be made to order in small batches with engine numbers carrying on from where they left off, stamped with those 80 year old Oliver number punches. All engines are individually run and evaluated prior to dispatch.

For a full history of the Oliver brand, one could do no better than read John Goodhall’s excellent book, “The Olivers and a Tiger” 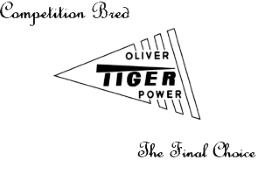